In this section we explore methods for customizing plots, including the following:

Here, we import matplotlib, numpy, and scipy (to generate some sample data)

Using scipy.stats, we can create a normal distribution! Notice how nicely centered and normal our distribution is! 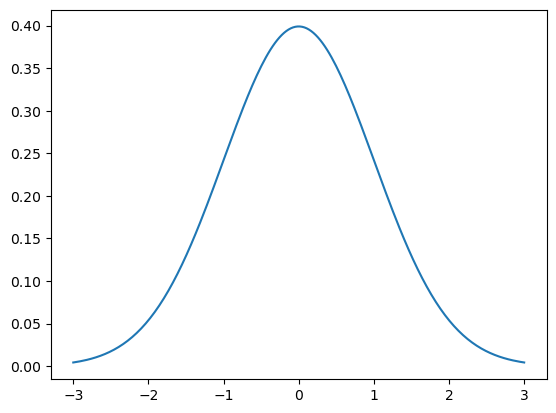 A common part of many people’s workflows is adding annotations, or “a note of explanation or comment added to a text or diagram.”

We can do this using plt.text which takes the inputs of the (x, y) float text position in data coordinates and the text string.

We can even add math text, using Latex syntax. The key is use strings with following format:

Here is the example equation we use!

If you are interested in learning more about Latex syntax, check out their official documentation.

Further, if you’re running the notebook interactively (e.g. on Binder) you can double click on the cell to see the latex source for the rendered equation. 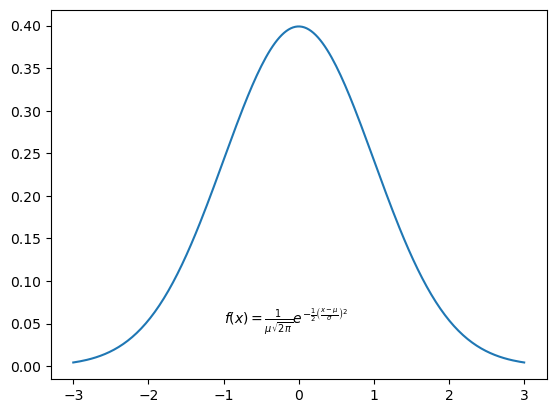 We plotted our equation! But it looks pretty small; we can increase the size of the text, and center the equation by using fontsize and ha (horizontal alignment).

This next example also uses latex notation in the legend text. 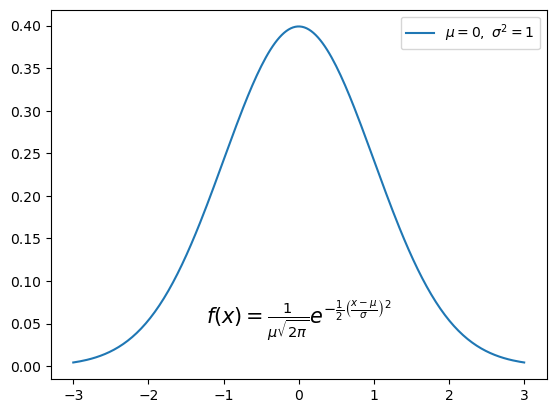 Add a Box Around the Text

One other thing we can add here, for readability, is a box around the text, using bbox.

The bbox argument in plt.text uses a dictionary to create the box! We pass in: 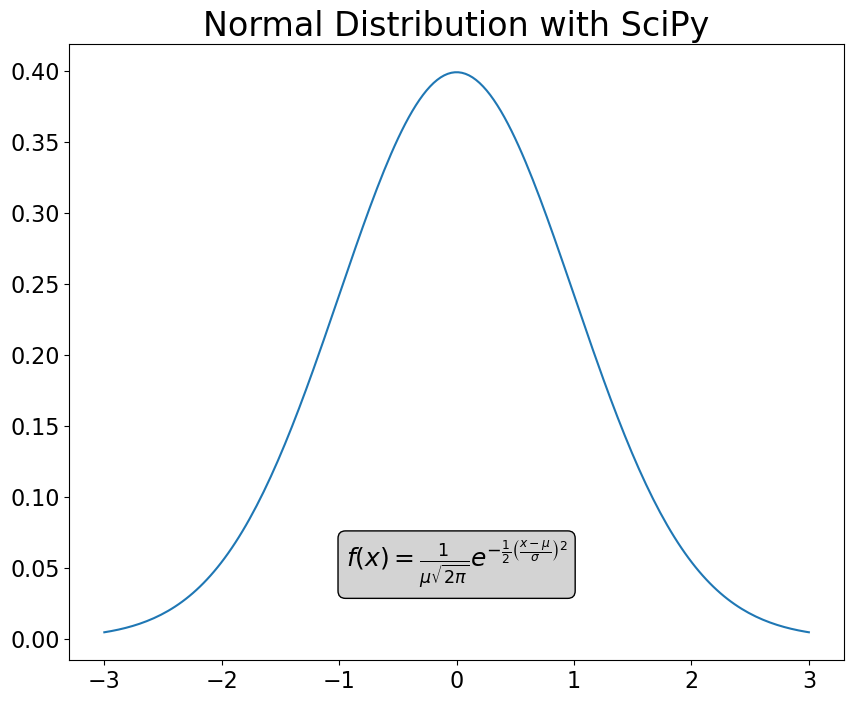 Colormaps are a visually appealing way to represent another dimension to your data. They are a matrix of hues and values allowing you to, for example, display hotter temperatures as red and colder temperatures as blue.

Click the dropdown arrow to see examples of colormaps within their respective classes.

There is a lot of info about choosing colormaps that could be its own tutorial. Two important considerations:

Before we look at a colorbar, let’s generate some fake data using numpy.random 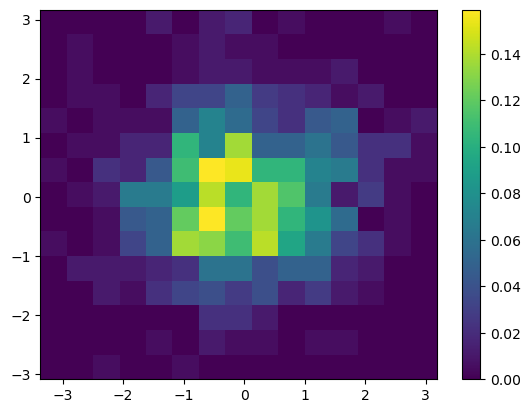 We can change which colorbar to use by passing in cmap = 'colorbar_name'. We can use the magma colorbar instead! 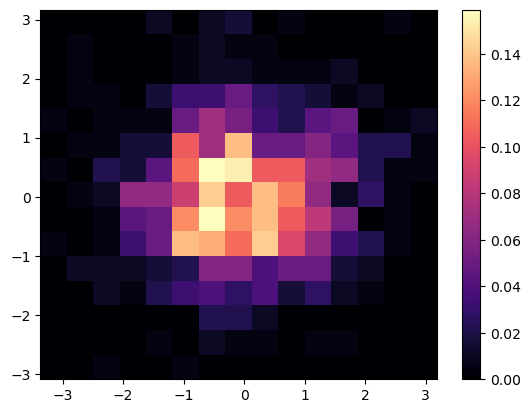 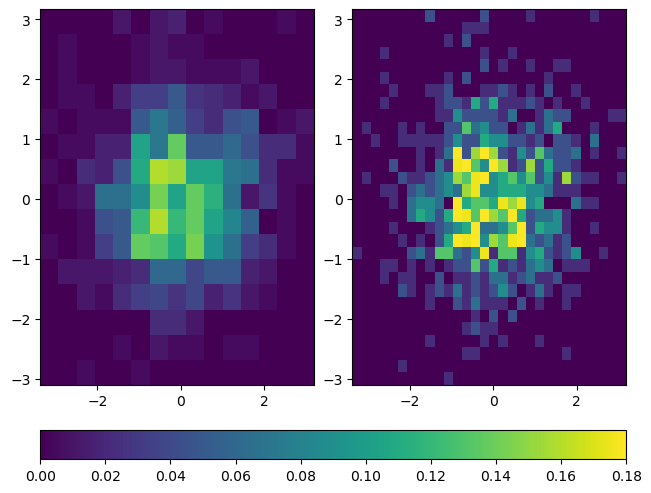 You may have noticed the input argument hist1[3] to fig.colorbar. To clarify, hist1 is a tuple returned by hist2d, and hist1[3] returns a matplotlib.collections.QuadMesh that points to the colormap for the first histogram. To make sure that both histograms are using the same colormap with the same range of values, vmax is set to 0.18 for both plots. This ensures that both histograms are using colormaps that represent values from 0 (the default for histograms) to 0.18. Because the same data is used for both plots, it doesn’t matter whether we pass in hist1[3] or hist2[3] to fig.colorbar. Read more at the matplotlib.axes.Axes.hist2d documentation.

Other kinds of plots can share colorbars too. A common use case is filled contour plots with shared colorbars for comparing data. vmin and vmax behave the same way for contourf as they do for hist2d. A downside to using the vmin and vmax kwargs when plotting two different datasets is that while the colormaps may be the same, the dataset with a smaller range of values won’t show the full range of colors as seen below. Thus, it does matter in this particular example which output from contourf is used to make the colorbar. 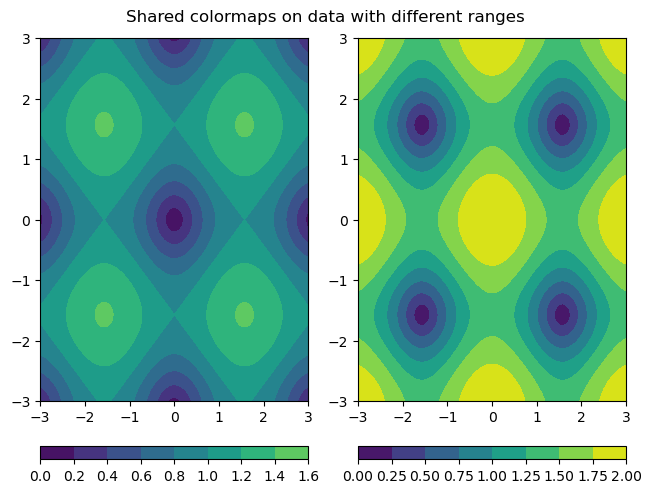 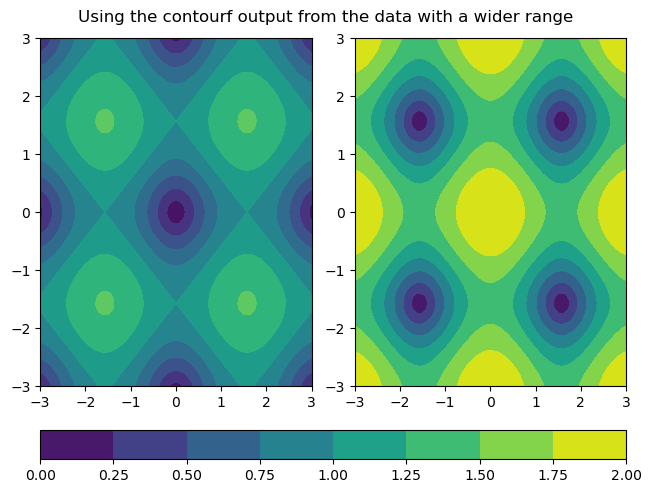 Even with the large collection of prepackaged colorbars, you may find it useful to create your own colorbar.

Below are 2 similar examples of using custom colorbars:

The first has very discrete list of colors called colors, and creates a colormap from this list with the call ListedColormap.

The second used the call LinearSegmentedColormap to create a colormap from interpolating the same list colors. 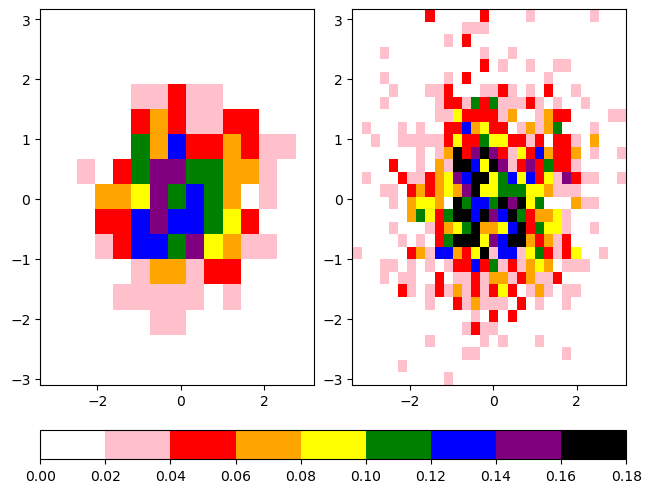 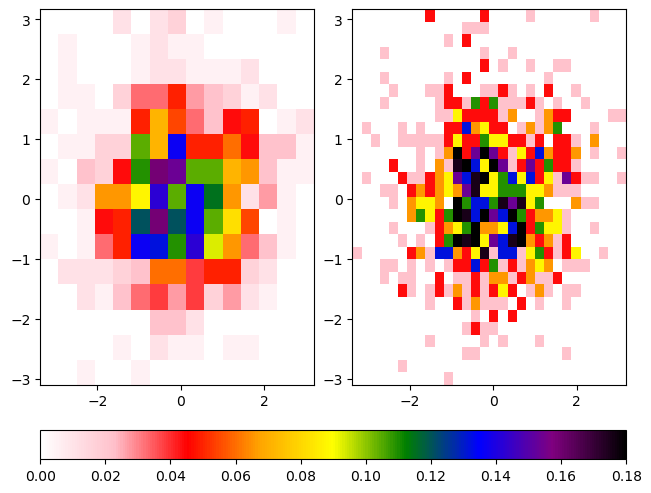 Note that both plots use the norm kwarg. The Normalize class linearly normalizes data into the [0, 1] interval. This is used to linearly map the colors in the colormap to the data from vmin to vmax. In fact, we used this functionality in the previous histogram exercise! The vmin and vmax kwargs for hist2d are simply passed into the Normalize function. When making a custom colormap, it is best to specify how you want the data normalized.

For non-linear nomalization, check out this Colormap Normalization tutorial.

One of the recent features added to Matplotlib is subplot_mosaic where you can pass the structure of your figure, and it will generate your subplots automatically!

For example, if we wanted two plots on top, and one of the bottom, we can construct it using the following block of text:

This corresponds to three axes: A, B, and C with A and B on top of C.

Once we create the subplots, we can access them using the resultant axes dictionary, with the syntax axes_dict['your_axis']. An example of this is given below! 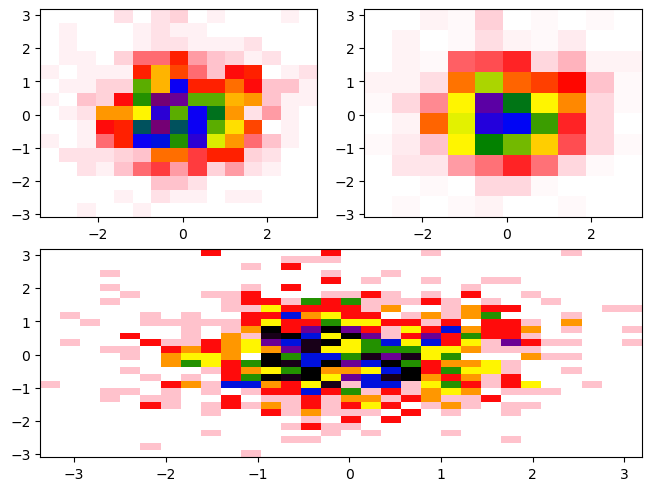 You’ll notice there is not a colorbar plotted by default. When constructing the colorbar, we need to specify: 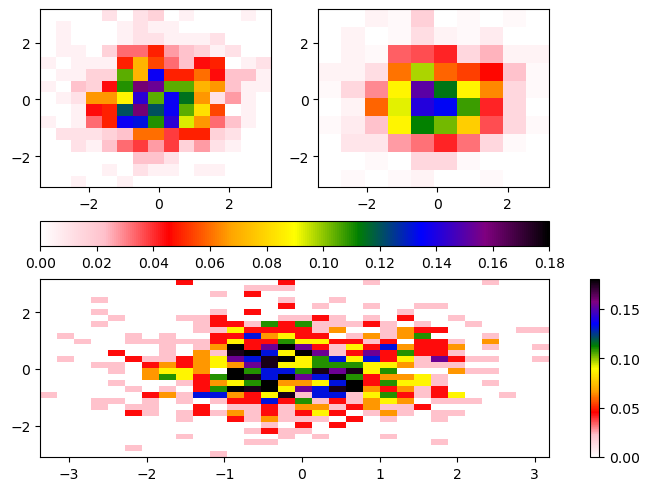