Brand new to Python? Here are some quick examples of what Python code looks like.

This is not meant to be a comprehensive Python tutorial, just something to whet your appetite.

Run this code from your browser!¶

Of course you can simply read through these examples, but it’s more fun to run them yourself:

A Python program can be a single line:

Why not make a for loop with some formatted output:

A few things to note:

To emphasize this last point, here an example with a two-line repeated block:

Like most languages, Python has an if statement for logical decisions:

There’s also a while statement for conditional looping:

Python is a very flexible language, and many advanced data types are introduced through packages (more on this below). But some of the basic types include:

The number m above is a good example. We can use the built-in function type() to inspect what we’ve got in memory:

Floats can be entered in decimal notation:

or in scientific notation:

You can use either single quotes '' or double quotes " " to denote a string:

A list is an ordered container of objects denoted by square brackets:

Lists are useful for lots of reasons including iteration:

Lists do not have to contain all identical types:

This list contains a mix of int, float, and str (character string).

remembering that we start counting from zero!

A dictionary is a collection of labeled objects. Python uses curly braces {} to create dictionaries:

We can then access items in the dictionary by label using square brackets:

We can iterate through the keys (or labels) of a dict:

Arrays of numbers with numpy¶

The vast majority of scientific Python code makes use of packages that extend the base language in many useful ways.

Almost all scientific computing requires ordered arrays of numbers, and fast methods for manipulating them. That’s what numpy does in the Python world.

Using any package requires an import statement, and (optionally) a nickname to be used locally, denoted by the keyword as:

Now all our calls to numpy functions will be preceeded by np.

Do some arithmetic on that array:

Sum up all the numbers:

Some basic graphics with matplotlib¶

matplotlib is the standard package for producing publication-quality graphics, and works hand-in-hand with numpy arrays.

We usually use the pyplot submodule for day-to-day plotting commands:

Define some data and make a line plot: 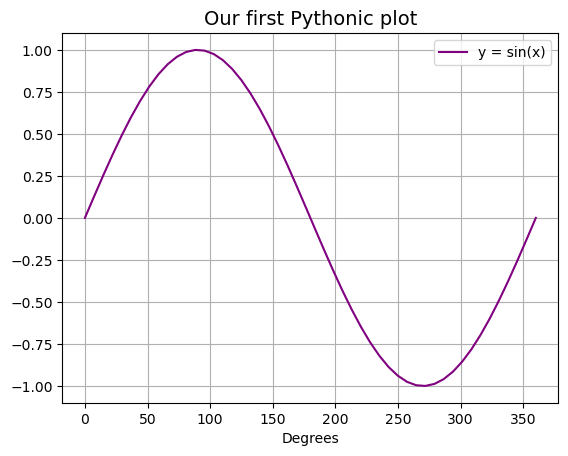 That was a whirlwind tour of some basic Python usage.

Read on for more details on how to install and run Python and necessary packages on your own laptop.

Getting started with Python